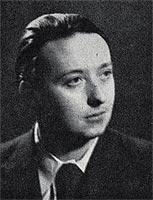 Maxime old was born on December 13th 1910 at Maisons-Alfort. After graduating from Ecole Boulle, where he studied for four consecutive years, he then studied at Ruhlmann’s until 1934. Ex-vice president of La Societe des artistes decorateur, (The Art Deco artists society) Maxime Old began teaching at l’Ecole Nationale Superieure des Arts Decoratifs (The Superior School of Art Deco). His art works were not only represented in multiple nationally renowned shows, such as Le salon des Artistes Décorateurs, since 1935, and les salons d'Automne of the Société Nationale des beaux-arts, but also in Copenhagen and Venezuela in 1950, as well as New York in 1952.

Maxime Old earned many diplomas, gold medals as well as prizes for his unique work. Le Mobilier National even requested furniture specifically made by him for Luxury Hotels, the Minister of Finances, and the French Embassy in the Netherlands. Born in a family of cabinetmakers, making furniture runs in his blood. Additionally, Maxime Old brought to the table what he was taught in school, and especially his ease in using smooth lines, complex, yet impeccable technics, that made his art work one of a kind. His knowledge has helped him make anything from paintings to desks, that he willingly customized following his clientele’s requests.

For more information on Maxime Old’s work, you may visit MaximeOld.net for the original version in French, or MaximeOld.com for the translated version in English.