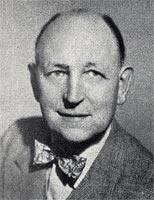 Jean Luce was a French ceramicist and glassware designer. Born in Paris in 1895, Luce worked in his father's ceramics shop, which made table crockery. In 1921, Jean Luce first showed his work at the Musée Galliéra, Paris, and subsequently at the Salons d'Automne and Salons of the SAD (Société des Artistes Décorateurs). In 1923, Jean Luce opened his own shop, although he was not able to take over its direction until 1931. He was a juror at the 1925 Paris 'Exposition Internationale des Arts Décoratifs et Industriels Modernes'.

From 1931 onwards, specializing in ceramics and glass for the table, Jean Luce concentrated on the double problem of shape and decoration. Painted by hand or from stencils, his motifs were linear and naturalistically styled in the Art Moderne manner highlighted with gold for luxury pieces. His early work was in clear enameled decoration, and, from c.1924, he used sandblasting. In 1935, Luce designed porcelain and glass for the ocean liner, Normandie. These designs were later adopted by the 'Compagnie Générale Transatlantique' for their other ships.

In the early 1930s, Jean Luce designed glassware produced by Cristal de Saint-Louis and, in the late 1950s, stainless-steel flatware for Sola France. In 1937, he became a member of UAM (Union des Artistes Modernes) and exhibited at the 1937 Paris 'Exposition Internationale des Arts et Techniques dans la Vie Moderne' in the UAM Pavilion. He was responsible for the glassware-plate section of the 1949-50 'Formes Utiles' exhibition at the Pavilion de Marsan and also exhibited in its 1953 and 1958 exhibitions.

Jean Luce taught at the Ecole des Arts Appliqués in Paris and was a technical advisor at Sèvres. In the mid-1980s, Les Verreries de la Rochere reproduced Jean Luce's hand-blown drinking glasses from original designs of c.1925. A coffee-tea set was reissued by Lumen Center, 1988-91.