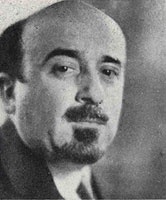 Claudius Linossier was born in Lyon in 1893. Although he was the son of a weaver, very early on he showed his taste, which never varied, for just one material : metal.
After a training in ironwork be began an apprenticeship at Berger Nesme, the gold and silversmith in order to perfect his skill in drawing and his mastery of metals.
After a first short stay in Paris, interrupted because of the war, Claudius Linossier returned to continue his training with Cardeilhac where he was, for a short period, working a longside Kéco Zambon, at that time the best copperware artist in Jean Dunand’s work shop.

However, as he was very fond of Lyon, he returned in 1920 to live and to open his own workshop.
His first creations were mainly inset in copper or silver, however Claudius Linossier soon began research on the colours and patinas that became his trade mark. Therefore his work can be identified by certain tonalities of red or deep black nickel silver which were unique..

His apotheosis could probably be situated between 1924 and 1932, a period of high production when he excelled in his mastery of forms and colours. Claudius Linossier was then using geometric anthropomorphosis or plant motifs which, when combined with polychrome patinas, brought life and movement to his work, that then became a work of art.
He first approached sculpture in 1925 however it was only from 1930 the he showed this side of his talent. He also painted but as a private pastime.

This versatile genius soon became liked by people of his time, Claudius Linossier therefore showed his work in many exhibitions and salons, received official orders and collaborated from time to time with Ruhlmann, Sornay, Mercier and Chaleyssin or Sandoz.

He also became friendly with great artists such as Follot or Pompon, who influenced his sculptural interpretation in bronze, of cats and ducks.
The Second World war, because of the rationing of materials, broke off this period of creative work. His pieces in copperware became rarer, and production was gradually reduced before finally coming to an end when  Claudius Linossier died in 1953.