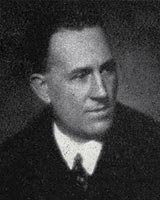 Pierre Legrain was born in Levallois-Perret on October 2, 1889. The son of a wealthy industrialist, he enjoyed a happy childhood.  A student at the College Sainte-Croix, at the age of 12, he convinced his parents to allow him to abandon orthodox studies in order to "cultivate" himself and learn to draw. He took classes at l’Ecole Germain Pilon and continued his studies, his extensive culture leaving an impression on all those who met him.  Extremely athletic, the gifted young man progressively exceeded his physical abilities and impaired his health with a double lesion of the aorta.

Legrain’s devastated father passed away shortly after, casting him into misery. Thereafter, in order to meet the needs of his mother, he was forced to submit to the worst drudgery. But he continued to draw and soon met the acquaintance of Paul Iribe. Through performing the most diverse tasks, Legrain was able to acquire a remarkable command of skills: miniature spatial models, designs for furniture, jewelry, decorations, etc… Despite being declared unfit for service during the war, Legrain insisted on being drafted. After his assignment to the earthworks division, he was put in charge of the secretarial service which allowed him to draw for publications including “Assiette au beurre”, “le Journal”, “le Témoin” and Iribe’s "Le Mot." Upon his marriage, Legrain settled himself in a small house in the rue du Val de Grace which, with little means and a wealth of ingenious ideas, he converted into the charming residence familiar to all artists.

By 1919, he was acquainted with Jacques Doucet, who entrusted him with the binding of his books and subsequently gave him commissions for furniture and all sorts of precious objects. Legrain’s commissions dramatically increased after he received the Blumenthal prize. In 1920, he exhibited his first bindings at the Salon des Artistes Décorateurs. In November 1923, he organized a special exhibition which ended up being a revelation for him at the Galerie Briant-Robert. Together with Pierre Chareau, Ruhlmann, Mallet Stevens and Paul Poiret, Legrain participated in the designer’s salon of 1924 with a sensational collection of furniture entitled "the reception and the intimacy of a modern apartment.” From 1925 to 1929, in a sort of creative frenzy, Legrain simultaneously pursued his activities as a decorator and bookbinder while settling into his new home, Villa Brune. He died of a heart attack on the day of his move on July 17, 1929.

Pierre Legrain’s name cannot be dissociated from the rebirth of modern bookbinding. Needless to say, it must be remembered that it was at the instigation of Jacques Doucet that the draftsman and designer unexpectedly found himself engaged in the art of bookbinding. Other than the diversity of his gifts, his culture and his avant-garde spirit nothing seemed to have prepared him for this undertaking. Pierre Legrain’s décors are almost always abstract and linear, with the letters of his book titles often serving as the ornamental motif. But notwithstanding their appearance of freedom, his compositions are conceived with an architectural rigor.

Abandoning the customary browns, reds and greens that prevailed in bookbinding, Legrain employed leather as well as unexpected materials with unusual, light tones whose delicate, refined harmonies complemented the purity of his rhythms.  His work was a stunning success and whilst the adventure lasted only a dozen years, Legrain left a decisive mark on the art of bookbinding. His influence continues to persist. Moreover, his activities as a decorator cannot be forgotten. At the same time he was working for Jacques Doucet, Jeanne Tacharp commissioned Legrain to refurbish her Paris home and her villa in La Celle-Saint-Cloud. Everything from the doorlocks and lighting, to the furniture, silverware and even the garden revealed the design of a book binder; the leather representing grass and the mosaics in flowers. All of it had been created by Legrain. After Jacques Doucet’s death, the enthusiastic, luxury-loving Pierre Meyer entrusted Legrain with the refurbishment of his mansion on Avenue Montaigne. There, with unlimited means, Legrain could give free rein to his creative imagination and fantasy. But despite the pleasure he derived from such achievements, he resolved to minimize his activities as a decorator in order to devote himself entirely to books.

Thus, Pierre Legrain had already instinctively chosen the place assigned to him in contemporary art when fate abruptly put an end to his work.