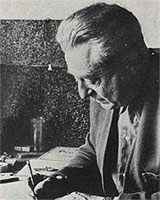 Jean Després was a French silversmith most famously known for his architectural pieces, including the bijoux moteurs – “engine jewellery” – where pieces were heavily inspired by the Futurist movement that glorified machinery. Born in 1889, Després spent his childhood in Avallon, where his parents ran a successful business selling jewellery and objets d’art from their shop. Jean was only fourteen years old when he left his family home to begin a silversmith apprenticeship in Paris, where he also spent his evenings attending various drawing classes.

The start of the First World War in 1914 meant that Jean had to cut his apprenticeship short to work as an army messenger. In 1917 he joined the air force as a mechanic, but after his prestigious graphic skills were noticed he was made a draughtsman. This period would have a huge effect on his later career.

After the war ended, Després returned to his childhood home in Avallon to take over the running of the shop. He installed a workshop there so that he could also work on his own solo projects when the shop was closed. Although Jean remained in Avallon, he contributed his pieces to many exhibitions, where they eventually appeared under his own name from 1928.

Després worked mainly with silver, which worked well with the white jewellery trends in the 1930s and remained affordable in the economic crisis of the period, during which he also used pewter. He used semi-precious materials, such as turquoise, coral and onyx to inject some colour into his creations. Després also collaborated with other artists, most noticeably Étienne Cornault, with whom he made bijoux glaces, ‘glass jewellery’. In addition to jewellery pieces, Després produced tableware items and various objets d’art.

A notorious workaholic, Després did not take on any apprentices, believing that their skill and work ethic would never match his own. Consequently, when Després requested that his shop be closed before his death in 1980, no more of his pieces were produced after that time.