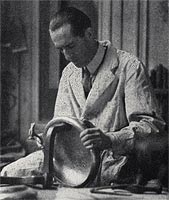 Maurice Daurat was born in Bordeaux on August 2, 1880. From 1895 to 1898, he was a student at the Ecole Germain Pilon where he received no specialized training. He learned the arts of drawing, painting and especially sculpture, for which he showed taste and skill from his early childhood.  In order to make a living, he began by doing decorative work making embroidery patterns and gradually moved towards metalwork.  Upon returning from his involvement in the war of 1914-1918, he began exhibiting objects including gold, silver and tin cups and boxes at the Salon d'Automne and des Artistes Décorateurs.  But it was not until the Exhibition of 1925 that his personality was first revealed: winning a prestigious award, he went on to take part in all the major events of decorative art in France and abroad: Geneva, San Francisco, Barcelona and Brussels (Grand Prix).

He was a member of International Jury at the 1937 Exhibition and became senior vice president of the league of goldsmiths (Grand Prize).  Outside his participation in exhibitions, he created the basins and fountains of the Quai d'Orsay gardens, and a monumental fountain for the rotunda of the city of Paris (Palais de Tokyo). In 1935, he served as the gold/silversmith for the legations of Canada, The Hague and Brussels. The French state commissioned him to design a basin with water jets and in 1945 he was commissioned by the city of Paris to make a vase for the flat of the Prefect of the Seine. Many of Maurice Daurat’s works belong to private collections, and his tin and silver pieces can be found at the Museum of Decorative Arts in Paris, Cairo and the Metropolitan Museum in New York.

Recipient of the Grand Prize of Honor at the Salon des Artistes Décorators in 1949, Maurice Daurat became a knight of the Legion of Honor in 1929 and has been an officer since 1935. Daurat was a sculptor as well as a goldsmith, executing elevated forms with a hammer.  He produced entirely hand-made work representative of the age-old tradition of tin pottery. Although he employed gold, silver, and duralumin (all the interior decorating, lighting and objects of worship of the chapel of a large boarding school in Thionville designed by architects Hiriart and Tribout), his metal of choice was tin.  With his solid purity of forms that preserved the expressive value of volumes under a play of light, Maurice Daurat restored tin to its original nobility and secured a prominent place for himself in the religious and civil goldsmith trade and in interior decoration.

A modest artist, passionate about his craft but virtually incapable, however necessary, of defending his work, Daurat owes his triumph not only to the fundamental virtuosity of his work but to a series of fateful opportunities.  Thanks to an important submission to the exhibition of 1925, Daurat was noticed by a man of taste and fortune who was able to provide him with the material resources required to execute his work for some years, until a "crisis abruptly interrupted his generous initiative.”   Luxuriously installed in avenue Friedland, Daurat had at his disposal the metals with which to realize whatever his imagination conceived.  While the adventure only lasted three years starting 1927, by 1930 Daurat’s art had taken off and he had made a name for himself.

During and after this experience, Daurat was at liberty to express himself in the most diverse areas: luxury and religious goldsmith’s art, jewelry, necklaces, rings, belts, bracelets, as well as vases, basins and lamps. Hostile to all decoration, Daurat chose metal as the sole medium of his expression, enhancing its beauty through robust forms structured by harmonious rhythms logically arranged in accordance with the object’s purpose.