"Christofle Orfèvrerie is looking for a creator"

One of our clients was initially interested in a vase he saw at auction in France, but he unfortunately had to deal with an auctioneer and an expert incapable of answering his emails, leading to his decision to reach out to Docantic to confirm the authenticity of the vase.

This client, who is a collector of prestigious artworks from Italian artist Gio Ponti, randomly found an auction website and noticed this vase. He immediately wanted to purchase, but it turned out that the name of the artist it was assigned to, was not Gio Ponti. Knowing that this vase is constantly sold as an artwork by Gio Ponti, this collector is utterly surprised to see it being sold under yet another prestigious Italian artist, Lino Sabattini (Exhibit #1). 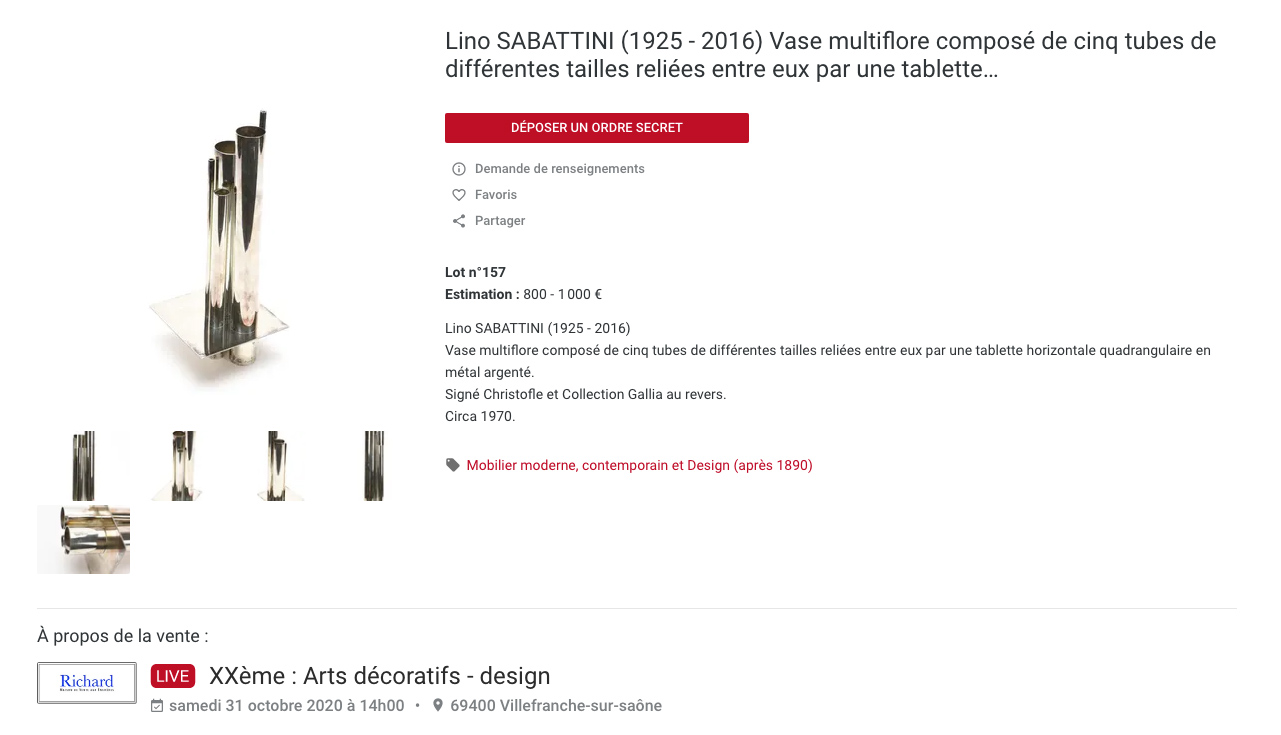 We then received a photo of said vase, which is indeed, very beautiful, elegant, and stamped by the Silversmith’s factory Christofle and another one from the Gallia collection.

At this point we could simply call it a day and say "another one" since this vase is known worldwide for being one of Gio Ponti's pieces. Because of this, we will not be listing the auction houses across the world who have sold this vase under Gio Ponti since it would be much faster to list those who haven't. The auction houses who have made this error seem to be the ones who have not sold this vase at all...(Exhibit #2).

At this point in time, no auction house or art gallery seems to have assigned this vase to the correct artist... which is... MIND BLOWING!

What we know so far is that this vase was falsely attributed to Gio Ponti for over 20 years, and according to a French auction house, is now finding a new creator under the name of Lino Sabattini. The client tried profusely to reach the auction house via email, but got no response, and like previously mentioned, he ended up contacting Docantic to get more information on this vase. We started off by checking the bibliographical references in the Docantic library, the ones that all the auction houses show off in order to assign this vase to Gio Ponti (Exhibit #3).

5 minutes later, we compared the models represented in the books to the said vase, and as per usual, the bibliographical references did not match that vase, so we had to check it out for ourselves.  It has been announced that France may be quarantined again. Even though we are based in the United States, some of our contacts could have been difficult to reach so we had to act fast...It was race against the clock.

Gold Medal: Salvatore Licitra, the God Almighty of everything Gio Ponti in Italy, as always, gets back to us immediately to confirm that this piece is indeed NOT by Gio Ponti!! (Exhibit #4).

Silver Medal: Gisella Sabattini, Lino's granddaughter. La Bella Ragazza confirms that this vase was NOT one of Lino's either... Gracie Mille Gisella!! ​(Exhibit #5).

Bronze Medal: Christofle Paris asserts that this vase is neither Gio Ponti's nor Lino Sabattini's, but is in fact one of Jacques Sitoleux's creations, a major artist who's been drawing models for Christofle for 30 years. Marie Mouterde, new head of the heritage project at Christofle, very graciously and obligingly shared with us the page of their catalog of 1970 as well as the complete information sheet of the vase (Exhibit #6).

And who do you think hands over the medals...? Well, it is none other than Jacques Sitoleux himself! We did in fact, contact Jacques Sitoleux, who greeted us with a warm welcome. An extremely pleasant man, who shared with us the entirety of his career as an artist, and who also confirmed that he was the designer of the vase. He started working with Christofle in 1966, after finding an ad in a newspaper stating that "Christofle orfevrerie is looking for a creator..." Jacques Sitoleux answered, thanks to his spouse Francoise, and that's how the famous vase emerged! A humble artist who stayed in the dark who deserves every bit of recognition for his fascinating artwork. Rest  is going to take care of bringing his work back to light!.

If you were trying to use up all the names of Italian artists with a name ending in "I" then we'll never see the end of the tunnel… I mean there is also Ferrari, Pirelli, Mastroanni, Cerruti, Buitoni,,… take your pick for the next sale at this rate! But in all seriousness, if you search thoroughly, you may still find diligent auction houses... thank god! In fact, we recently created an article highlighting a team of auctioneers/experts in the south of France: We have to admit that hard working teams like this one are, sadly, hard to come by these days, and we will always be more than happy to honor their effort and perseverance any time. We gave a call to the expert in charge of the auction, and informed him of the disappointment of our client regarding their lack of communication. The expert then proceeded to assure us that this vase was indeed a part of one of Sabattini's collection, and that he would go as far as sending our client a "condition report" via email within the next hour following our phone call. We stated multiple times that it would be unnecessary to our client to receive a "condition report" but rather an "authentication report". It goes without saying that our client received absolutely nothing... "no condition report", and no "authentication report". Overall none of his emails were answered from the expert in charge.

But it seems like the expert saw it in there without a doubt...In this case, we can recommend a very reliable source for this particular situation, just out of one of Brierre De Boismont's novels: “Hallucinations: or, the rational history of apparitions, visions, dreams, ecstasy, magnetism, and somnambulism”, easily found on Amazon or at your local library...

Because we are "cool" by nature, we took the initiative to email the auctioneer in charge of the sale in question, to attest to the true identity of the artist of said vase, who is not Lino Sabattini, but unfortunately it was our turn this time to be left on read...The day of the sale, despite our numerous alerts, the vase was presented by the auctioneer as one of Lino Sabattini's artworks, and evidently was not sold. This kind of behavior does not surprise us one bit...

This investigation was not a difficult one to solve as the resources needed were available to anyone, all we had to do was reach out to the right people instead of being a sheep and blindly following the pack..Today we can indeed confirm that this vase is neither from Gio Ponti nor Lino Sabattini, but is from none other than Jacques Sitoleux. We do however need to underline something of importance here; instead of attributing the vase left and right to random artists hoping for the highest value, it would be wiser to know the real history behind it. This vase is apart of a very important collection launched by Christofle in the 60s by Henri Bouilhet, who was the head of the company back then. After expressing their interest in coming up with a modern, avant-garde collection Christofle proceeded to create the Collection Christofle Contemporain. This collection was supposed to solely be made out of contemporary materials, without the use of any specialized equipment/tools, something that would be easily comparable to Jean Prouvé. This "Orgues" vase, made out of tubes and a metal plate, followed the rules of this program to a T. This collection only called for artists with a more modern twist. Jacques Sitoleux, is in fact the creator/designer chosen by Christofle in order to bring the Christofle Contemporain collection to life. He will later be assisted on some models by Francois Pautre.

Last but not least, we will never hold prejudice on anyone whatsoever. However, we are aware that ignorance and arrogance go hand in hand, but be sure that contempt will get nothing out of us but an answer.

That being said, we are beyond grateful and thankful for Salvatore Licitra, Christofle Patrimoine and especially Marie Mouterde, Gisella Sabattini, and of course Jacques Sitoleux, for sharing their resources with us. "Jacques an old chatty man" as he likes to refer to himself, we appreciate them all for sharing their resources with us as well as their heartfelt stories and their precious time. We also want to thank the #1 global marketplace 1stDibs, for correcting the error on their listing the minute we made them aware of it in order to protect their buyers.. Good Job!