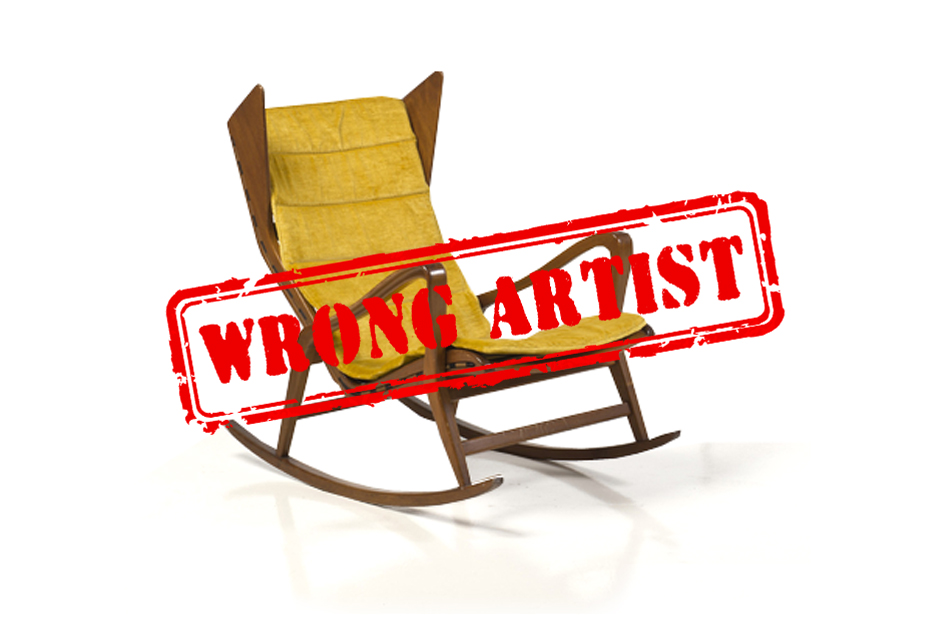 Attribution error at Piasa for $26,000 rocking chair to Gio PONTI

In September 2016, the PATROL received some information on lounge chairs sold for $13,000 at PIASA, on November 18th, 2015, from an anonymous informant. These chairs were advertised as “model 572”, edited by Cassina, and designed by Gio Ponti (Exhibit #1). True? False? The PATROL decided to investigate.

Both identifications do in fact come with references for justification (Exhibits #3&4). The bibliographical “label” has a huge impact on the value of design furniture… to a certain extent, until the PATROL pulls over auctioneers responsible of “manifest abuse of bibliographical references”. What about PIASA? Specialists or tourists?

The cited books are unmistakable, and give Gio Ponti absolutely no credit. In the contrary, the design is clearly by “Ufficio Tecnico della Cassina”, or in other words, it is a 100% homemade creation. PIASA the illusionist lives up to its reputation! If Gio Ponti did in fact work with Cassina, and more specifically on the most famous Superleggera chair starting 1957, he doesn’t seem to be this lounge chair’s designer.

Several theories may explain such a mistake from PIASA’s experts:

Answer B seems to be the most accurate (and perhaps a bit of A & C as well!). Wanting 25% of the buyers’ expenses after “working” for 2 minutes is quite exciting after all. This kind of procedure is common in the design industry, as it occurred several times between 2001 and 2013 at WRIGHT, SOTHEBY’S (No! Really?!), CORNETTE de SAINT CYR... and many other Italian, Swiss and Americans auction houses (Exhibit #5). More surprising is that PHILLIPS and CHRISTIE’S also fell into the trap, when these two auction houses are usually on top of their game.

Among all the listed results, one of them catches the PATROL’s attention. The lounge chair was sold by an Italian auction house, which also quoted the exact same reference… and a “certificate from the Gio Ponti Archives” (Exhibit #6). Would our informant and the books be wrong, and the auctioneers right?!

The PATROL then contacts an Italian auctioneer, who replied with (way too rare) professionalism, and admitted the mistake made in its own catalog (Exhibit #7).

The investigators also contacted Gio Ponti’s Archives, who also confirmed the misattribution to Gio Ponti, and suggested a cohesive pattern with the help of book references (Exhibit #8): it might be a design by Cassina’s design office.

We feel released: our informant and the documentation are correct. What about PIASA & Co.? Well, they simply don’t have what it takes to be design experts.

After following Salvatore Licitra’s lead, the PATROL finally contacted Cassina’s historical headquarters in Meda, Italy. Five phone calls, four emails and two weeks later, the PATROL receives their answer, together with an extract of their 1964 catalog which closes the case for good (Exhibit #9).

"I confirm that this model was not design by Gio Ponti, but by Cassina's studios. Please find enclosed a catalog page from 1964".

Based on the PATROL’s experience, an artwork sold at auction and advertised with: a firmly identified designer + an editor’s name + matching literature + a model reference, is properly assigned to the legit maker. PIASA is the sad exception to the rule. Surprising? No, just disparaging! If the so-called design specialists at PIASA can make such mistakes on a 1964 design chair, the auctioneer's Medieval and Asian arts sales should make us cry!

Between our grasp on the informant’s tip and the resolution of the case, 30 days passed. PIASA could say that such investigations are impossible for them to run for every single one of their 300+ lots of each auction sale. “Wrong!” answers the PATROL, because this is the very reason why their clients pay them big money. If they don’t feel comfortable with it, they can still resign… and by looking at the way they run their business, it’s time for them to strongly rethink their career path.

Before closing this case, the PATROL would like to thank its informant for helping cleaning the market from the mistakes that infest it, and every single protagonist who helped solving the case.